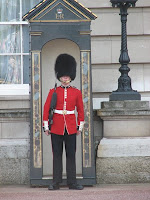 The British Crown has long known about the evil race of aliens attempting to control citizens minds through telepathy.
For over 100 years, Buckingham Palace guards, who guard the Queen and the royal family, secretly wear thought screen helmets under their dress hats to eliminate the threat of alien invasion through mind control.

Sadly, due to Prince Charles unusually large ears, a thought screen helmet has not been constructed yet to fit his large dome.

Back To Thought Screen Helmets Archives

Entertain Me With Your Wealth Of Worthless Knowledge

We pay homage to the sexy actresses and their cleavage who starred in science fiction movies and television series.

We keep you informed of all the rumors, updates, and conspiracies for your favorite TV programs.

Sometimes a picture is worth zero words. Sort of like politicians promises.

The LOTGK logo is a worldwide phenomenon. It can be found on all corners of the Earth. Look hard and you will see it.

Classic vinyl record albums rescued from my basement. See what you have been missing.

See who lives, who dies, who gets married, who gets divorced, who goes to jail, Natural disasters, and everything else under the sun.

1960's Catholic grade school with mean Nuns as teachers was a recipe of pure Hell. I knew my mission in life the day I pulled Sister Ann Teresa’s habit off her head. I had to know what secret treasures lay hidden beneath.

Once a thriving vacation resort has succumbed to the march of time as erosion destroyed the once beautiful beaches and amusement park. Only the restaurants and retail shops remain dotting the strip. And I have been to all of them.

Geneva On The Lake

Testimonials For The Grassy Knoll Institute

The Grassy Knoll Institute compels you to visit the category archives bursting with vast knowledge and enlightenment for the betterment of all humankind. The Institute works hard exposing (But not ourselves) only the most current media events of the world like no other site can. (Because this is the only site we own) And quit calling me Shirley! Level: Abby Normal User

As usual we celebrate our feast day with cutting edge news that no one else delivers. Just like pizza. Click the link button below (Me) to read the archives.

Merry Christmas and Happy Holidays. All Christmas related posts from the Grassy Knoll Institute with plenty of mistletoe.

One of Hollywood’s intriguing mysteries re-surfaced as a photo of actress Natalie Wood taken four years after her death in 1985, was posted on the Net.

Shark Week kicks off with 10 bizarre shark tales guaranteed to make you keep your toes out of the water.

Evidence Princess Diana fabricated her own death to end her connection with the royal family.

TAPS ghost hunter investigator Kris Williams has been teasing the Twitterverse with a big secret she has. Our investigative team dug it up.

Orchestrated by an evil race of aliens with delusions of world domination control the thoughts and actions of people through telepathic communication. The only defense is a Thought Screen Helmet.

Random shots of worthy news and photographs that do not quite fit into any of the standard Grassy Knoll Institute's categories.

The story begins where Lost ended, at the church where the castaways gathered in the series finale. The sequel ties up all loose ends. The castaways are not dead. They are not in Purgatory. They are very much alive. All of them. Tune in for the four part series by clicking the links below.

After watching the ABC series Lost pilot September 22nd, 2004, I was convinced I knew the secrets the show was hiding. Each episode from the pilot to the finale is critiqued as I bolster my theory.

Submitted for your approval. ABC Lost and Rod Serling Twilight Zone series are one in the same.

Grassy Knoll Institute. Home of the 99 cent conspiracy theory. We keep overhead and expenses low to provide more affordable and better tasting conspiracy theories for our readers. Hurry, supplies are limited at these prices. And quit calling me Shirley.

LOTGK
Youngstown, Ohio, United States
Riding the roller coaster of life, and the ones at amusement parks.